The Samin or Wong Sikep or Sedulur Sikep Movement that has been struggling against cement companies' expansion in Central Java since 2006 is a part of a larger (and longest) peasant-based millenarian movement in Southeast Asia (and Java). This research launches an inquiry into how such a movement survives the test of time.

The researchers apply concepts known around the singularity of the millenarian movement, such as "radical divergence" from everyday practices, "fusion of opposed qualities" like spirituality and materialism," "innovative features," and continuation of indigenous ritual practices.

In this paper, the authors argue that this "paradoxical" nature of the movement is the reason of its longue durée. These peasants’ protest is basically a demand for “spiritual entitlements” with the scopes reaching beyond human rights or any other standards known in the peasant movement’s legal history. The findings are that the Samin movement is fulfilling all the criteria of a true millenarian movement, which has gone beyond the point of no return of a simple "resistance". 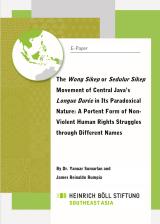 Article
Solidarity works involving communities from two different countries, Indonesia and Germany is a result of a collaborative work facilitated by usage of media technology. Social movements are no longer only read as a local entity with specific actors and issues but can be read within the framework of engagement with other actors and issues, both at local and international levels.
By Mokh Sobirin