Mekong River Flux and Flows: Capturing the Vulnerability of the Mekong Ecosystems in Thai Communities

Tiny changes in the environment, especially around the banks of the Mekong River, can greatly affect the local flora and fauna. The Mekong Butterfly, an independent ecological group based in Thailand, has been monitoring the impacts of water levels and changing aquatic patterns on two species: the Mekong river crinum lily, a Mekong riverbank plant, and the small pratincole, a bird adapting its behavior to the new conditions. Alongside monitoring turbidity via open science, community-initiated research shows fluctuating water levels are changing the regular Mekong water environment and making survival more precarious.

The Mekong river crinum lily (Crinum viviparum, known locally as bua and plub pleung tan Mekong among the general Thai public or even as ‘water onion’) is an endemic species, found only by the rocky and sandy Mekong riverbank. The Mekong river crinum lily can remain underwater throughout the flooding season while its flowers bloom in the dry season. It is common to find more than one flower at different blooming stages in a bulb. By the time the first flower wilts, a new one is ready to bloom, and blooming continues until the flooding season arrives and inundates the plant again.

A tiny change in the environment greatly affects its survival and many other Mekong flora which are vulnerable to environmental changes. When the Mekong River water level is controlled by dams, the seasons fluctuate throughout the year, sending mixed signals to the flora. The chances that the dam will discharge when the Mekong river crinum lily awaits its propagation period are now higher and frequently occur, resulting in the plant not propagating and possibly causing thriving plants to die as they are unable to adjust.

The Mekong river crinum lily thrives on rocky and sandy areas. Its leaves are long and narrow towards the apex and its shiny leaves help retain moisture, especially during extremely hot days. Some of the clumps are situated close to the waterways, depending on the surrounding sub-ecosystems. But not all river crinum lily plants have to be near the river – they can survive the whole dry season until the Mekong River rises again in the rainy season.

This picture shows the Mekong river crinum lily and its environment, which includes bird nests, riparian flora such as the willow-leaved water croton and the jambolan or Java plum (Syzygium cumini, known in Thai as wah), and riverbank agricultural plots by a swamp sub-ecosystem called Nong Pla Buek in Nong Khai province. The picture also marks the unseasonal fluctuation of waters in the Mekong in 2021 that flood the Mekong river crinum lily and damages their blooming and reproduction. Only a portion of the plants, located higher on the riverbank, survived and produced fruit this year.

During our surveys on 18 December 2020 and 3 March 2021 at Nong Pla Buek in Ban Nong village (Tambon Ban Muang, Sangkhom district in Nong Khai province), we found the Mekong river crinum lily mostly by rocky areas and riverbank ponds located higher on the riverbank. However on 28 December 2020, after the first survey, the water level in the Mekong increased 1.1 meters and later decreased, leaving much of the survey area free of flood between January and February 2021. By the time of the second survey, the Mekong river crinum lily spanned widely across the area and bloomed in various stages. We found the plant with young buds, blooming flowers, fruiting and ripened fruits. However, by the end of March and April, the water level in the Mekong rose again and flooded a portion of the river crimum lily at Nong Pla Buek. This affected the flowers and their reproduction directly and severely. Only a portion of the plants were able to continue fruiting and flowering this year. 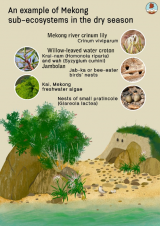 Dry season in the Mekong River ecosystems is the time for small pratincoles to lay their eggs. They migrate here to meet their mates, breed and live on the sandbank, rocky banks and rock rapids, which only emerge during the dry season when the water recedes. When hatchlings come out, they remain on the banks to learn how to feed themselves until the end of June or before the flooding season arrives and floods their nests. Then they migrate.

Small pratincoles mate for life and lay eggs on the ground across the banks. Each nest hosts between 1–4 eggs. The parents remain close by to find insects, protect their eggs from danger and rotate the eggs to control the temperature. It takes about 16–18 days before the eggs finally hatch.

Upstream hydropower dams are threatening small pratincole and other birds who lay their eggs on the riverbanks in the dry season. Unseasonal water levels due to dam discharge from China and Lao PDR have threatened the lives of fauna before they can adjust to the changing conditions. Records from members of Bueng Kan Rak Nok, a conservation group who has been monitoring and recording chick hatchings in Bueng Kan province, reveal that more than half of all hatching nests in the area were damaged by three unseasonal and immense floods during the dry season in 2018. The decreasing number of the bird population could mean a rapid increase in the number of insects that are harmful to agricultural crops and vegetables in the area.

More significantly, the Xayaburi Dam in Laos, which began its full operation in 2019, alongside dams in China are the key factors that alter the water level in the Mekong River to fluctuate daily and out of season. As the water level continued to rise, due to the abrupt discharge from Chinese dams in March (the dry season of 2021), the nests of the first batch of small pratincole hatchlings of the season were flooded completely in Loei and other Mekong riparian communities. It is possible that the Mekong bird populations could plummet soon.

The clarity of Mekong flux: community monitoring turbidity and sediment load changes in relation to the Xayaburi Dam

Seven Mekong riparian communities form a network to collectively monitor the vulnerability of the Mekong and ecological changes in Thailand. The groups conduct surveys on endemic Mekong ecosystems in their communities by setting up sample plots to survey flora and fauna species and sediment types. Measuring sediment loads and turbidity by using turbidity tubes (2-inch diameters and 120 centimeters long) and Secchi disks started in January 2021. These are ways to monitor the extent of materials suspended in water and its quality, noting cloudiness or haziness of the water. Measurements are recorded twice a month and continue on today.

Turbidity measurements recorded between February and March 2021 show a significant decrease. Turbidity levels at Hong Hian Nam Khong (Mekong School) in Chiang Khong, Chiang Rai, was 79 centimeters. All downstream measuring sites from Ban Pak Chom at Moo 10 in Loei to Ban Samrong in Ubon Ratchathani showed turbidity levels were more than 120 centimeters. Measurements by Secchi disks at Samrong station were 177, 233, and 150 centimeters respectively. This data clearly shows how ‘unprecedentedly clear’ the Mekong River had become and only confirms the hypothesis on the influence of the Xayaburi Dam on sedimentation. The sediment-starved phenomenon is more apparent between January and March 2021, and this means nutrients normally carried in the water are no longer making their way downstream.

The initiative to survey the Mekong ecosystems and turbidity levels is only a small step in using open science to monitor the unprecedented adverse ecological changes in the Mekong River. But this network of Thai Mekong communities is continuing to seek ways to revitalize the Mekong ecosystems in the long term, with data at hand.

Mekong flora and fauna have been affected significantly by changing water conditions due to the discharge of water further upstream. The fluctuating water levels in the Lower Mekong has directly affected the vulnerability of the Mekong river crinum lily’s natural reproduction and habitats. The eggs of the small pratincole on sandbanks and rocky banks, along with bee-eater bird (jab-ka in Thai) nests on the riverbank ground, are all at risk of unseasonal flooding. Other species have been notably affected: Mekong freshwater algae, known as kai, will not grow exponentially if the water level does not increase or the water becomes abnormally turbid. Fish are also confused with the seasons, affecting normal migration patterns and limiting breeding and egg-laying opportunities. Fluctuating water levels that sync with dam discharges and water storage have changed the Mekong water conditions and make survival across species at the Mekong River more precarious.

The Mekong Butterfly is an independent group that has come together to carry on the spirit of protecting the natural resources, environment, ecosystems in the Mekong River Basin, to encourage people living in the Mekong region (i.e. Yunnan, Laos, Myanmar, Thailand, Cambodia, Vietnam) to strengthen their natural resource management, to support processes for equality and freedom of access to information and institutional decision-making mechanisms that will affect the way of life and ecosystems of the Mekong River Basin both in the short and long term.

The views expressed by the author are not necessarily those of Heinrich Böll Stiftung.

Threats to the Existence of Riparian Communities of the Mekong

Article
Water resource management of the Mekong River is a source of differences and conflicts of interest between Mekong countries and extra-regional powers. What happens upstream significantly affects the downstream areas, and data sharing about the river is varied. Unfortunately, the states sharing this international river are not equal in terms of power and there are ongoing challenges for providing consistent water management to benefit local riparian communities.
By Khen Suan Khai

Cohabitation, Cooperation and Competition in the Mekong River Basin

Article
In 2019, and again in 2020, the Mekong River – known as the Lancang River in China - has experienced low flows that has caused hardship for millions of people whose livelihoods depend on it.
By Carl Middleton