Special Economic Zones and Land Dispossession in the Mekong Region

While industrial zones of various types played a key role in shaping Thailand and Vietnam’s export-oriented industrialization in the 1980s and 1990s, it was the 2000s that really saw special economic zones (SEZs) take off in the Mekong region as a model to drive industrialization and national economic growth. Over the past decade, all five Mekong region governments – including Laos, Cambodia, Myanmar, Vietnam and Thailand – have been actively reforming their laws and institutions to promote SEZ development, attract private sector investment and facilitate access to land for factories and infrastructure.

There are several drivers of SEZ. Push forces include the various regional economic cooperation mechanisms promoting trade and investment, including the Greater Mekong Subregion (GMS) economic corridors and associated cross-border infrastructure; unequal factor endowments in land, labor and capital that shapes cross-border investments and production across the regional landscape; the increased fragmentation and mobility of production networks which make it profitable for companies to move specialized aspects of the production process to different  locations to take advantage of a country’s cheaper land and labor; and increased availability of private capital within the Mekong and broader ASEAN. Pull factors include national laws and regulations to develop and attract investors into SEZs, the provision of land as concessions for SEZs by governments and the associated ability of authorities to define land as empty or illegally occupied.

Mekong region governments and other supporters present SEZs as necessary to attract domestic and foreign investment into manufacturing, commerce, tourism and other sectors to achieve economic growth. SEZs are promoted as a key policy tool that will boost production and exports of goods and commodities, help diversify national economies, and stimulate economic development by creating jobs and building infrastructure.

Despite these purported benefits, results have been mixed at best. While in some cases SEZs have generated wages for local workers and contributed to national import and export targets, their economic performance has often been disappointing in terms of attracting significant investment, generating revenue for the state or creating linkages with the domestic economy.[i] On the other hand, SEZs and associated infrastructure produce significant social and environmental impacts including land dispossession and conflicts, loss of livelihoods, and environmental harm and degradation. The promised jobs for those displaced by SEZs often fail to materialize due to lack of skills or competition with better wages offered in cities and across borders. The significant costs that SEZs have on society are often downplayed and treated as externalities; yet they also pose risks for governments and investors.

This brief is a summary of a report that examines regional- and country-level policies, laws and impacts of SEZ development and their intersection with land governance. While dynamics play out in ways specific to each individual country, the confiscation of land from smallholders by the state to provide inexpensive sites for investors in manufacturing and other commercial activities is occurring across the Mekong region. Trends and processes which are common to all countries include the adoption of laws and governance structures that protect business interests at the expense of people’s rights and the environment; an absence of meaningful consultation with affected communities; lack of transparency and accountability in land acquisition and the development of SEZs; inadequate resettlement and compensation for lost land and livelihoods; and difficulties in seeking legal redress for impacted communities.

Land Watch Thai undertook the study in collaboration with independent researchers and activists from the five Mekong region countries. The report is based on a review of existing literature, complemented by field visits to selected SEZs where authors have been engaged in monitoring and advocacy.

Special economic zones vary considerably across the Mekong region, but tend to have the following common attributes:

Quantifying SEZs in the Mekong region is challenging due to lack of data and clarity regarding the status of existing SEZs and because there are many different typologies of “economic zones”. Table 1 indicates there are around 74 “special economic zones” at various stages of development in the Mekong region; however, the figure jumps to more than 500 if various different kinds of “economic zones” are included (e.g. industrial zones, industrial estates and parks, coastal economic zones, cross-border special zones, etc.). Together these zones amount to well over a million hectares of land across the Mekong region, much of which used to be community farmland and forests. However, many of these zones are not currently operational, and large portions of land seized for SEZs remains un(der)utilized.

SEZs may be developed by the state, a private enterprise or joint venture between government and private sector. In the Mekong region, most are developed and operated by the private sector, although the management of the zone itself is overseen by a government agency, normally an SEZ authority. SEZs are established and constructed by zone developers who then seek investors to lease the area within the SEZ. Zone developers are responsible for the construction of infrastructure, provision of services, establishing internal rules, and providing security. In Thailand and Vietnam, the government plays a key role in supporting infrastructure development within and outside SEZs. In Laos, Cambodia and Myanmar, the governments rely on private investors. While domestic companies are significant investors in SEZs in many Mekong countries, attracting foreign investment is critical to the development of SEZs across the region.

Living up to promises? While SEZs are being promoted and developed at a rapid pace throughout the Mekong region, many are failing to meet government’s own expectations in terms of attracting investments, generating state revenue, producing positive spillover effects to the local economy, or generating local employment. SEZs are risky and expensive projects, which produce huge social and environmental costs that are borne most heavily by the rural poor. When SEZs face difficulties attracting investment, it leaves individuals and households whose land has already been taken or waiting to be taken in limbo. They can neither cultivate their agricultural land nor receive the purported benefits that the construction of the economic zones is supposed to bring.

Who benefits from SEZs? In the Mekong region, there is obfuscation between private interests associated with concessions granted for SEZs to commercial developers and the purported public interest that they are supposed to serve. Interpretations of what type of development is in the ‘public interest’ are often left to state representatives, local elites and foreign investors.

Legal frameworks for SEZs benefit private investors and do not provide sufficient human rights and the environmental protections. SEZ laws often do not meet national or international human rights obligations, including standards on involuntary resettlement.

Forced evictions: Most of the land granted for SEZs is occupied and used by communities. Often it is fertile farmland, forests or wetlands critical to local livelihoods. While the land is sometimes titled to individual households, mostly it is land held under customary tenure arrangements. Communities living on the site of SEZs are sometimes forcibly evicted in processes that lack transparency and fairness, without due consultation and without just compensation paid. Land grabbing has also occurred through land speculation and large-scale financial investments in around SEZs.

SEZ projects are often developed without consultation of the people affected. Unlawful and poorly managed land acquisition has generated conflicts and brought suffering to communities. Land concessions have often been granted to SEZ developers without informing or consulting local communities living in the area. Local authorities have at times employed coercive means to force villagers to accept low compensation rates. Overall, land acquisition and resettlement processes have lacked transparency and fairness, contravening national and international law.

Loss of livelihoods, unjust compensation: Industrial zones and SEZs often dispossess people from of their lands and means of livelihood. Laws requiring the state and investors to pay compensation for damages are either deficient or not enforced. Assumption of state ownership over land means that people often struggle to claim their landholding rights and entitlements to compensation. For those people who do have legal land documents, compensation rates are often below market price.

Dispute resolution and access to justice: There is limited access to legal redress for rights violations that have arisen as result of forced displacement. Most SEZ management committees do not have a grievance mechanism that would allow communities affected by SEZs to file complaints and report human rights abuses. Other channels for seeking legal redress are plagued by bureaucratic and costly procedures and there is often political interference in mediating institutions and the judiciary. In the absence of impartial institutions, affected communities resort to a variety of informal mechanisms to help in their negotiations with wealthier and more powerful parties, but these efforts are hampered in contexts where there are political limits to resistance and public complaint.

Lack transparency and accountability: In addition to the lack of transparency and accountability surrounding land deals, there is also limited publicly available information regarding SEZ projects in the region, including feasibility studies, impact assessment studies, resettlement and compensation plans, and approval processes. Decision-making on SEZ development takes place behind closed doors without much public discussion or involvement. The problem is compounded in countries where the state controls the media and information is limited to the positive aspects of projects.

Limited absorption of local labor in SEZs: Some SEZs have created employment opportunities for local people, particularly young women who generally occupy the lowest-paid manual labor positions. In other SEZs, there is a heavy reliance on foreign labor. For many farming households who have been displaced by SEZs, accessing employment opportunities in SEZ can be difficult, as they lack the skills necessary for the types of jobs on offer. The COVID-19 pandemic has highlighted that SEZ workers are highly vulnerable to external shocks and crisis, and that labor-intensive industrialization is not a good basis for building secure, resilient or sustainable livelihoods. Instead, continued access to farmland, forests and other natural resources has been critical factor enabling workers and their families to survive through the pandemic and its economic aftermath.

If SEZs are to have wider societal benefits, they need to be developed, managed and operated in ways that safeguard the rights and interests of local communities and the environment. To that end, we make the following recommendations:

To the private sector

Investors have the responsibility to employ due diligence measures to ensure they are not complicit in human rights violations. Concrete steps that private investors can take include:

[i] The Asian Development Bank continues to be a strong supporter of SEZs in the Mekong region despite documenting various failings and risks associated with SEZs. See, ADB. "Asian Economic Integration Report 2015: How Can Special Economic Zones Catalyze Economic Development?" 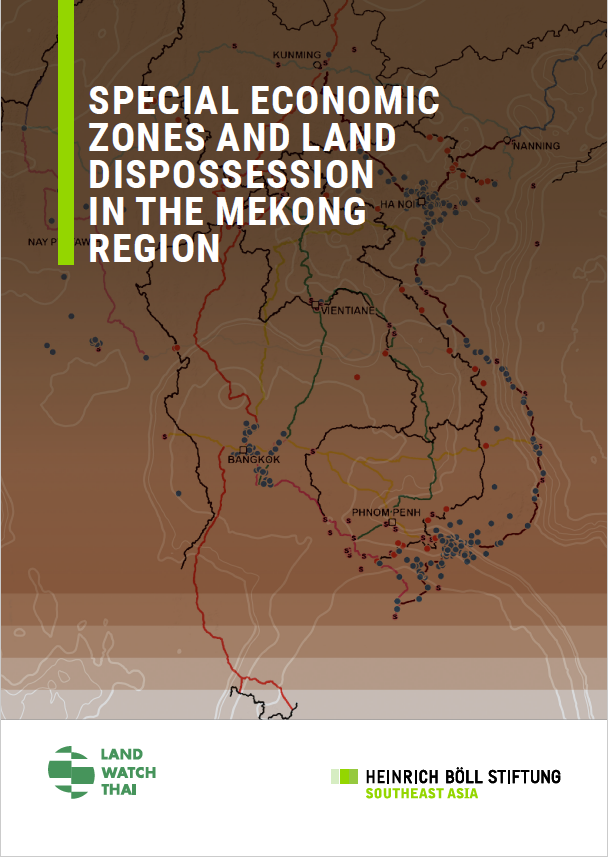 Special Economic Zones and Land Dispossession in The Mekong Region

This report examines, SEZs in the Mekong region are often linked with human rights violations such as land dispossession, poor working conditions and environmental degradation. As SEZs have expanded in the region, so too have social conflicts and resistance from local residents who have fought to protect their land and resources.