Reflecting Human Rights and Peace in Timor-Leste as an ‘Outsider’

I made my first trip to Timor-Leste in 2013. At that time, I must confess I had limited knowledge about the country. In contrast with most scholars, I did not learn the country from books; instead, I started to learn about Timorese politics from the lens of human rights and peace by learning its culture and through the stories of the people I met informally.

Anyone who has been in Timor-Leste would notice the significance of the murals and graffiti not only in the capital city Dili, but also in the districts such as Lautem. Arts is one of the most inclusive means of communication in this small country of approximately 1.3 million people. Arte Moris, a free art school located in Dili, must be credited as the turning point on how I learnt politics, human rights and peace through the appreciation of a bottom-up approach. In a country where the search for a state identity continues, and where nationalism has been largely constructed on traditional local cultures with the challenge to distance itself from the influence of former colonial powers and globalization, the role of arts cannot be dismissed or ignored.

This influenced one of my earliest works on Timor-Leste, written in 2017, and it relates to art and how it galvanizes youths. Despite the difficult situation that most of these young people are in, their high spirits and resilience is remarkable. It is through the artists and people whom I met and in the communities that continue to shape my view about the country. I was inspired by them and I have previously described how Arte Moris became a place for young Timorese to express themselves[i] while helping them bond and share positive values about their country and what they believe the true meaning of human rights and peace should be in a country that has endured decades of violence. Through their arts and music, these artists voice their dissatisfaction and discontent with government policies, such as the lack of job opportunities for youths.

Both a young and old population face exclusive sets of challenges and opportunities. Timor-Leste has one of the youngest populations in the Asia and Pacific region. According to the 2019 data provided by the World Bank, 37.3% of Timor-Leste’s population is younger than 15 years old[ii]. Conventionally, a young population like Timor-Leste means there are significant opportunities ahead of them with a larger labour force and more innovative opportunities for economic growth. But the reality is far from this.

The Timorese that I met along the way, be they academics, journalists, activists, young and old people, helped me to change my views on human rights and peace. During these conversations, one intriguing question raised was what exactly human rights really mean for the Timorese community, which endured a long period of bloody conflict during Portuguese colonial rule and under Indonesian occupation. This is how my latest edited book, Rethinking Human Rights and Peace in Post-Independence Timor-Leste Through Local Perspectives came about, with an attempt to provide the answer to the question: What do human rights and peace mean for Timorese in the post-independence context? 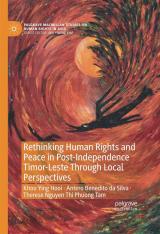 Edited together with Antero Benedito da Silva and Therese Nguyen Thi Phuong Tam from the Universidade Nacional Timor Lorosa'e (UNTL), this book offers perspectives from the ground on human rights and peace in Timor-Leste by highlighting local voices with another six local contributors (Juvinal Dias, Fernando A.T. Ximenes, Horacio de Almeida, Jose Cornelio Guterres, Eugenia Urania da Costa Correia and Adilsonio da Costa Junior). It posits that the nexus between human rights, peace, security and development no longer mean absence of conflict, and we argue that sustainable peace must be built from a right framework to protect the locals’ interests in the processes.

Such an approach came about as researching on Timor-Leste from afar. I am fully aware with the contestation between ‘outsider’ and ‘insider’ perspectives. The question associated with insider and outsider researcher positionality has been discussed widely, not only in research but also among communities such as the civil society actors in Timor-Leste. As a country where the international actors continue to play a rather dominant role, such resistance to the international actors and outsider researchers like me is understandable as the uneven level playing field continues to take place. Critical awareness about outsider-insider positionality is extremely important. In the literature, taking an outsider approach can be considered to be able to be more objective and critical[iii] of the realities. However in the case of Timor-Leste, it is not quite as simple as this from my experience.

That being said, the dichotomy of outsider/insider must be understood by acknowledging the uneven relationship of power and knowledge[iv]. There is power involved in the relationship between me and the people I communicate with, and we must acknowledge that the insider has inside knowledge that the outsider does not have. There are recognised complexities inherent in occupying the space between, especially when the personal and professional experience are intertwined.

Throughout my empirical observation in Timor-Leste, I found the lack of autonomy on local actors in peace-making contexts. In many instances, international actors are rarely able to act autonomously in an effective manner without the partnership of local actors. Hence, our latest edited book emphasizes the urgent need to facilitate the creation of political and social structures that can support and offer contextual rights and dignity for the Timorese community.

Timor-Leste can be considered ‘Asian’ but also ‘Pacific’ because of its ethno-linguistic and oral history connections. Coming from the Southeast Asian region, as a Southeast Asian scholar, I realize the necessity of filling this research gap for us to better understand Timor-Leste, and more importantly, to learn about the country from the perspective of local actors.

At the time that Timor-Leste moves towards strengthening its state-building operations independently since the restoration of independence in 2002, it continues to be one of the world’s poorest countries with 42% of the population living below the national poverty line despite being an oil-rich state[v].

As I reflected on the role of the UN in Timor-Leste[vi], the choices made during a peace process and failures to address root causes can have long-term consequences. Having said that, understandings of human rights and peace in Timor-Leste can be better comprehended by highlighting its variations in terms of quality and features, and perceptions of peace as a dynamic societal process of change. As a country that experienced an UN-assisted transition with the 1999 referendum, followed by state-building operations under several missions and peacekeepers with the UN and other countries such as Australia, the discourse of peace, security, development and human rights remains intriguing in Timor-Leste.

In most cases, both the local and international actors enter into a bargaining relationship whereby each actor imposes its own cultural values, norms and practices and when this happens, tensions can arise. This is a reminder for me of my positionality while researching about Timor-Leste. What is particularly needed is to close the gap of power relations between local and global narratives so that both actors can continue to shape each other through progressive interrelationship. But that can only take place when both actors realize and acknowledge the contested space. As highlighted in the key message of the book, a rights framework must be integrated into the peace and development nexus in Timor-Leste. That is a fact that all actors must be reminded of.

[i] Khoo, Y. H. 12 June 2017. How arts heal and galvanise the youth of Timor-Leste. The Conversation. <https://theconversation.com/how-arts-heal-and-galvanise-the-youth-of-timor-leste-73927>

Dr. Khoo Ying Hooi is the Head and Senior Lecturer at the Department of International and Strategic Studies, Faculty of Arts and Social Sciences, Universiti Malaya. She has been active in the field of human rights and democracy in Southeast Asia for over a decade.

Obtaining ASEAN membership has been one of Timor-Leste’s foreign policy goals since 2002.  This article discusses the current dynamic in Timor-Leste and what it means to be an ASEAN member. This is based on the domestic context that shapes Timor’s interests. Many commentators have taken a position in advocating for Timor’s membership based on short-sighted policies. At the same time, ASEAN continues to argue that Timor "does not have the capacity”. This article goes further by asking how Timor-Leste can benefit from this membership and what the necessary conditions are for Timor to do so.
By Guteriano Neves