G20 in Hamburg: Setting directions towards a democratic multilateralism

The G20 Hamburg Summit in July 2017 will be about nothing less than how globalization should be governed in the future. At the Summit, the 19 G20 countries, plus the European Union will have to respond to the key question of our times: How should a globalized world economy be coordinated for the benefit of all humanity against the backdrop of economic uncertainty, higher levels of inequality, climate change, refugees and migration?

On December 1, when Germany assumed the G20 Presidency, it launched a three-pillar program aimed at “shaping an interconnected world” by helping to ensure stability, improve sustainability and accept responsibility. These ambitious goals require not only the support of the other 19 G20 members but also a robust and well-functioning multilateralism that will have to rest on the ’shoulders’ of the world community. This world community cannot be expected to simply accept the judgments of the G20 “club”. Therefore, the G20 must engage with the United Nations and other more representative institutions and respond to the voices of the 174 countries which are excluded from the G20. What the world needs is cooperation on an equal footing between nations as well as a fair balance among their differing interests. Above all, it will however be necessary to redefine the purpose of economic markets and re-align national development strategies for the benefit of all.

Globalization for the benefit of all

Globalization has benefited too few for too long. In many countries living conditions have improved for the global middle class. They have enjoyed the increasing global interconnectivity enabled by travelling, digital media, experiencing other social realities and cultures, and a wide range of products and goods from various continents. But they are a minority only of the global population.

In many countries, citizens are increasingly marginalized by trade and investment agreements and partnerships that move their jobs and accelerate the rural exodus, in Africa and elsewhere. Sub-Saharan Africa, for example, accounts for a mere 1.7% of world trade.

A growing number of people - even in industrialized countries - feel excluded and left behind as a result of such agreements, regressive economic policies, technological changes, and political powerlessness. Today, very few wealthy individuals control as much wealth as half of the world population. This shocking trend in wealth distribution continues as access to decent work declines and wages and salaries continue to stagnate or diminish.

Furthermore, many low-income populations in developing countries work outside the formal economy depending upon their plots of land and access to assets such as water to engage in subsistence farming. However, their livelihoods also come under increasing pressure, for instance, through the land grabs of agribusinesses and the global trend towards industrial agriculture or development of large scale infrastructure operations. Subsidy policies, such as the European Union's common agricultural policy, create unfair competitive distortions, destroying small farms all over the world.

As a result, in many countries, young people are forced to emigrate in the hope of finding work and a future that are not available in their home countries. While borders are no obstacle to mobile capital and traded goods, emigrants face new hurdles and obstacles as more and more borders are being closed down. An increasing number of people flee from war and violence. Migratory flows are affecting entire nations, emigrants often move from impoverished rural areas to urban areas and then abroad.

Political representation of the many, not the few

Increasingly, citizens feel that political systems fail to represent their interests and, even worse, shape global regimes that undermine their economies, livelihoods, and the natural environment. This is fueling mistrust towards politicians and public institutions. There are growing calls for a "strong hand" and more and more citizens are casting their votes for authoritarian political parties. Others take to the streets in protest. In many G20 countries, the opportunities for civil society involvement have been or are being dramatically reduced, with a growing trend toward restricting or shutting down citizens’ groups and even criminalizing protest. Human rights defenders are exposed to increasing risks. This global trend also manifests itself in the G20 countries and poses a threat to civil liberties and democracy in general.

Meanwhile, climate change is inexorably progressing. Its primary trigger is that of an economic model which relies on fossil fuels and which has pervaded almost every corner of the world. Decision-makers are deaf to the calls for real incentives to contribute to the sustainable development that is both needed and inevitable. There are signs that the fossil fuel lobby has captured governments and prevented them from taking the necessary action to cut carbon emissions sharply, as needed for a sustainable future.

Conventional growth has been the focus of the G20 agenda. This focus was officially declared with the launch of the Framework for Strong, Sustainable and Balanced Growth at the Pittsburgh (U.S.) Summit in 2009. At the 2014 summit in Australia, the 2 percent global economic growth target (over trajectories) was clearly given precedence over the aim to curb global warming. (At that time, there was a 2 degree goal which was re-defined to the more ambitious 1.5 degree goal (over pre-industrial levels) in the 2015 Paris Agreement). Growth rates alone, however, do not tell us anything about the actual well-being of citizens, the quality of jobs, resource exploitation, or climate-related risks.

In 2009, the G20 Leaders promised to reduce "inefficient subsidies" for fossil fuels but progress on this goal stalled; indeed, there is disagreement about the definition of the terms “subsidy” and “inefficient.” In 2016, there were peer reviews of subsidies of the U.S. and China and more countries will follow. But it is urgent that the fossil fuel subsidies of G20 member countries be eliminated; they amount to US$444 billion dollars per year, i.e., four times the global investment in renewable energies.

What is required is a coherent intellectual approach taking into account financial, trade, investment, and economic policies, on the one hand, and climate policies and the sustainable development goals (the 2030 Agenda), on the other. If the G20 countries are to cope with the challenges of our times, they must focus on how to foster coherence among these policies. The German presidency has expressed a willingness to tackle this issue.

Conventional growth alone is not a solution: We need a radical departure from the more and more uncontrollable imbalances created by the growth policies of the last decades. These have been driven by finance capitalism and resulted in sovereign debt crises and austerity measures, which erode the fabric of many societies and jeopardize democratic cohesion. Indeed, the financial or speculative economy has become the “tail” that wags the “dog” of the real economy.

The G20 members are powerful political and economic players. If they muster the necessary political will, they can set the course for the future by formulating coherent policies. That is economy, trade and investment policies should achieve sustainable and equitable development and vice versa. At the same time, they should invest in global public goods to benefit the many, not the few. Among others, this implies measures such as:

The German presidency seems to be making a stronger effort than previous presidencies to create an "open and transparent G20" engaging in a broad dialogue with seven engagement groups, including civil society. Civil society, however, is much broader and more diverse in Germany than the few non-government organizations and associations represented in the officially recognized "Civil 20 (C20) engagement group".

The establishment of the C20 some years ago is progress in itself, and Germany has the chance to present its G20 partners with a model that could contribute to setting C20 standards for the future. To date, there are no binding rules defining whether or how civil society should effectively and autonomously relate to the G20. When the G20 caravan moves to Argentina where the subsequent, 2018 summit will be held, the C20 may be at the mercy of the Argentine Presidency: Will civil society receive official recognition and support? Will the host government – apart from token responses for publicity's sake – have a serious interest in the participation of their own civil society and international civil society?

If citizens are not involved in the globalization process and their interests not taken into account, democracy could be eroded in an ugly manner. There is gloomy news from several countries that the systems of “checks and balances” associated with democracy are undermined or failing. In the past, democracies have also been associated with a “social contract” – an understanding of how, among other things, public services and decent jobs would provide the means for dignified lives. Globalization lacks the social and ecological contracts that would help uphold democracies.

In essence, a new multilateralism is about coherent policies that put “people at the center” in ways that reverse the current trend towards en egoistic, self-centered protectionism by organizing fairer ecological and social policy solutions and upholding human rights.

This is why we are engaged! 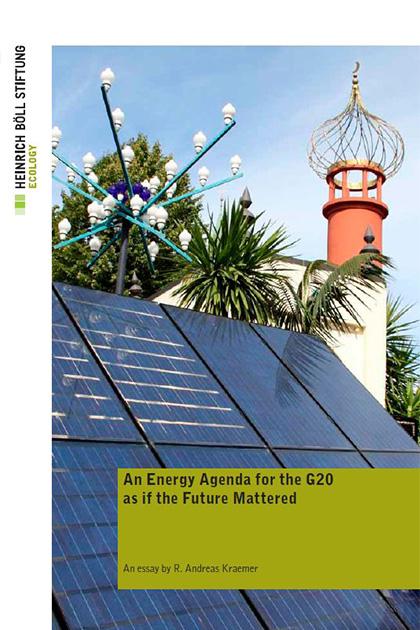 An Energy Agenda for the G20 as if the Future Mattered

The G20 has fallen behind other international organizations in addressing the challenges of climate change and supporting sustainable energy transformation and electrification. This article lays the foundation for a reflection and discussion on what the G20 can usefully do to support these transformations, and how it must change to achieve this.

Power and legitimacy of the G20 in a multilateral governance system

The Group of 20 (G20) is a “club” of nations with significant influence. There is a significant democratic deficit in the G20 since its decisions and actions are not governed by international law and it is not accountable to representative bodies.
By Nancy Alexander and Dr. Heike Löschmann