Last July marked the third year after the Computer Crime-related Act has come into force. An activity that drew wide coverage from the press was the seminar to mark the “Third years of Computer Crime-related Act: Rule of Law and the Accountability of the Government”, supported by the Heinrich Böll Stiftung. During the seminar, analysis was made on controversies concerning the law’s enforcement including the definition of information deemed as an offence that compromises national security. Another issue was about criminal proceedings against the service providers which are identical to the offenders.

Issues arise as to how much responsibility should be held from the service providers. The third issue was about the broad mandate of the state officials in their attempts to investigate and compile evidence against the alleged offenders. It was also discussed about the outburst of online community during the recent political crisis. A number of web boards generated both true and false discourses and information. It should be noted that the government and the pro-government factions have made the most use of the online media. Therefore, in order to provide immunity to internet users, it is necessary for them to be made aware of the importance of the media and to campaign for respect of the rights of all sectors in their interaction in both the real world and virtual world. During the seminar, questions were raised about the roles of the MICT, particularly about the worthiness of the investment made to sustain censorships, since in order to ensure complete censorships; a lot of resources are needed. Meanwhile, the issues to be censored have not been definitely specified.

The seminar was organized on 21 July 2010 by the Thai Netizen Network in collaboration with Campaign for Popular Media Reform (CPMR) and Southeast Asia Press Alliance (SEAPA).

For further information on the analysis of the Computer Crime Act in Thailand and for press coverage, please check out thainetizen.org 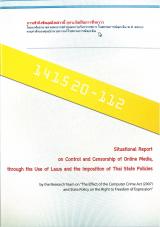 Situational Report on Control and Censorship of Online Media, through the Use of Laws and the Imposition of Thai State Policies

"Considering the sketchy data on the 74,686 URLs blocked by the MICT,and the CRES casting a net to block ranges of IP addresses, no one can deny that the Thai people's right to freedom of expression and opinion in the online world is in crisis". The Situational Report on Control and Censorship of online Media, through the Use of Laws and the Imposition of the Thai State Policies is part of a research project on the effects of the Computer Crime Act 2007 and state policies on the right to freedom of expression by iLaw Project and the research team supported by Heinrich Boell Stiftung Southeast Asia.